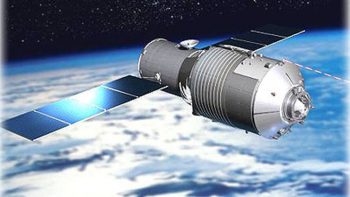 “OUT OF CONTROL Chinese satellite could hit Earth in three days – and boffs don’t know where” – The Sun, 27th March 2018

“Out-of-control Chinese space station is predicted to smash back into the Earth’s atmosphere over Easter – and Australia is in the ‘impact zone’” – The Daily Mail, 27th March 2018

To answer the immediate questions these headlines raise:

This is the latest instalment in a growing narrative around the danger of space junk – discarded bits of rockets and satellites which are gradually falling out of orbit and back to Earth. This is a very real problem, and sizeable chunks of space agencies are devoted to predicting space junk re-entry, most notably ESA’s Space Debris Office and NASA’s Orbital Debris Program Office.

Incredibly, all of the junk in orbit is tracked (cool interactive where you can track TIANGONG 1 in a cloud of other junk). This is so that satellites like the international space station can dodge them and not become space junk themselves. The worst case scenario, named the Kessler Syndrome, is a chain reaction of collisions reducing all of the satellites we rely on to a fine, glittering cloud of debris that ultimately blocks our access to space. Notable recent steps towards this dystopia came in 2007, when China converted their own satellite into 3000 pieces of junk with a passive-aggressive missile (yup China is ‘that flatmate’ when it comes to, erm, communal space..), and 2009, when a commercial American satellite and a Russian military satellite collided yielding 2000 more pieces. The current tally is around 16000 pieces of trackable space junk with a range of particle sizes stretching from centimetres to whole spent rocket bodies from past space missions.

Thankfully, almost all objects falling to Earth are not only slowed by the air resistance as they speed through Earth’s atmosphere, but are heated rapidly until they burn-up harmlessly about 80km above the ground. This will be the fate of almost all space junk, however pieces with high melting points (e.g. tungsten metal parts) will make it down to Earth’s surface. Most of these are tiny fragments and do not impact with enough force to injure anyone. Large or dense pieces will also make it to Earth’s surface and pose the most risk to people. Luckily the Earth is very sparsely populated due to oceans and deserts, so the chances of you being hit by space junk are currently numbered at 1 in several trillion.

Where Tiangong-1 could land. The graph left shows population density. The graph right is the probability of reentry for each latitude. Image courtesy of ESA.

So what is the most likely fate of poor Tiangong-1? Most of Tiangong-1 will burn up in our atmosphere, the rest will land in the sea, and Earthlings will go back to eating chocolate eggs and reading the Sunday papers.